Tweets by IHSMarkit
Oil Storage Vulnerability: Which Countries Have the Least Capacity to Spare as Crude Demand Declines and Supplies Build Up?

Current global output levels cannot be sustained throughout the second quarter because oil storage capacity will fill up.

This differential adds up to a first half 2020 surplus of 1.8 billion barrels. That exceeds the upper end of our estimate of available (empty) crude oil storage capacity, which is 1.6 billion.

This means, owing to lack of storage, that more production will be cut or shut in than previously anticipated.

But where will production be forced to go lower—or even shut in?

“The current supply/demand gap adds up to a first half 2020 surplus of 1.8 billion barrels. That exceeds the upper end of our estimate of available crude oil storage capacity, which is 1.6 billion. Production is going to have to be reduced or even shut in. It is now a matter of where and by how much.”– Jim Burkhard, vice president and head of oil markets, IHS Markit 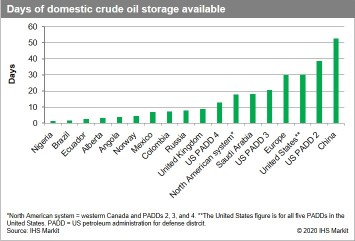 To be sure, the rank order of which regions shut in production will likely be more complex than this figure implies. For example, the velocity at which the surplus is materializing is an unprecedented challenge, and not all tanks are available to all parties. Some storage facilities are dedicated to the activities of specific companies. However, an analysis of overall domestic storage availability as a ratio of production does provide a useful metric to determine which producers are vulnerable.

“Those with better access to storage options may fare better than others. Creative storage solutions are likely to emerge, but they are unlikely to make up for the sheer pace and scale of the supply surplus.”– Aaron Brady, vice president, IHS Markit